In 2018, the security analysis literature was enriched with a Volume signed by professor Nicoleta Annemarie Munteanu, under the title Componenta mediatică a conflictelor militare (in the editorial realization of the TechnoMedia in Sibiu, a prestigious publishing house recognized by the National Council of Attestation of University Degrees, Diplomas and Certificates).

The fundamental reason for this research is specified in the Foreword by Professor Cristian Troncotă, who warns that “In the information age and the information war, the security-media binomial becomes intrinsic, being impossible to separate. Communication strategies become components of security strategies, and prevention must become concrete through the actions planned and carried out according not only to what is required, but especially to what people expect to be told”[290].

Additional details are provided by the author in the Introduction, with necessary details about the relationship between the media and the phenomenon of war today: ”The media can neither initiate a war nor stop it, but the media can intervene in a positive or negative way in the process of social communication and social change, their impact being multidisciplinary and long-term. In conflict prevention, the impact of the media requires institutional security for controversy, for the possibility of diversity and pluralism. In a rule-of-law state, media law is a framework in which codes of ethics for journalists promote accountability at the individual level. In the field of conflict prevention, the media can play a particularly important role by rehabilitating and credibilizing information, but also by alerting society and decision makers about dangerous situations”[291].

The next chapter develops, in a comparative manner, the processes of media communication and military organizational communication. In advance, the two forms of communication are described by their specific features, to then make the connections between them – with priority being analyzed the effects of media communication on the military organization and the relationship between the military and civil society through the media. The context under which all applicative analyzes are made is described as follows: ”The military organization, by the content and nature of its activities, by its status and role in society, by the specific way of organization, by the quality of human resources, by national and international relations, is an important point of attraction for the media. Especially nowadays, the interest of journalists is increased due to the presence of Romanian military structures in various theaters of operations in the world. From this perspective, the press influences the way in which the topics are presented to the public, both from the point of view of informing the public and from the point of view of presenting the opinion on that information”[292].

The third chapter deepens the horizons opened by the previous one. Under the title Crisis and conflict management from the perspective of media communication, we have the benefit of two case studies in media management of crises and conflicts: the Iran-Israel crisis and the conflict in Afghanistan. Based on these, general principles and rules regarding the relationship between the army and the media in theaters of operations are deduced; the role of the journalist in military conflicts; protection of the journalist in conflict areas; the role of media networks in crisis and conflict prevention.

From the various conclusions and with applicative value, we note that “In the information age, media networks, through specific activities, produce both positive effects, image level of the military organization, but also negative effects that affect the image, credibility and legitimacy of the military entity. Media visibility, which can prove to be a vulnerability in the field of security, is manifested by the leakage of information, with effects both in peacetime and in times of crisis or conflict. In matters related to security, the context is particularly important and should only be reported in the press by specialized journalists. During these periods, media organizations are divided into three categories: own, adversary and neutral, each category acting according to its own logic and policies. In the national, regional and global security equation, media organizations can participate in strengthening or degenerating the security situation”[293].

For additional documentation of information, comments and analysis, the reader benefits from 13 annexes, which summarize schematically and graphically introductory aspects of communication, media and analysis of organizations.

Who uses Mrs. Nicoleta Annemarie Munteanu’s research? As an inter and multidisciplinary approach, it can be proposed (equally) to experts and students in communication and journalism, as well as to those in the military and security field. Last but not least, the topic can open a specific direction of research and higher education, autonomous and well specified, as a cornerstone in the preparation of the war journalist. In fact, the paper is already in the recommended bibliography of courses taught at the University “Lucian Blaga” in Sibiu – Department of International Relations, Political Science and Security Studies, both at the undergraduate level (program ”Security Studies”), as well as at master’s level (”Security and International Relations” program). 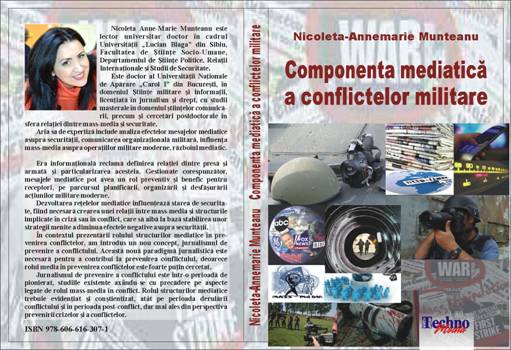